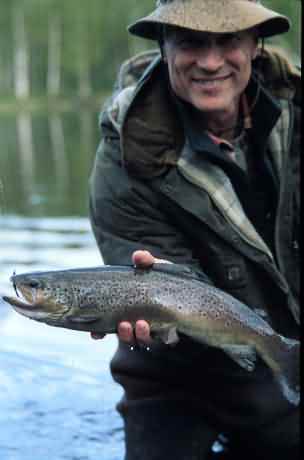 There is a special feeling about being cautiously fishing along a river where at any moment an elk drinking at the waters edge may appear round the next bend, a beaver by its lodge, or even a lynx.

I had heard that bears also had increased in the area. But this did not worry me too much. They usually always have time to hide before the inquisitive visitor catches sight of them: Only their droppings, similar to cowpats, give tell-tale evidence of their presence in the vicinity.

My fishing guide promised that there would be a lot of both brown trout and grayling in the rivers we were making for along twisting gravel tracks. However, most caracteristic were the surroundings with deep forests and several beaver traps. And by the river, pointed, gnawed-off treestubs along the banks also showed where they had ravaged.

With feverish zeal I prepared the fishing tackle and an E-12 imitating a caddis fly on the surface of the water was my first choice of fly. A couple of swift false casts in the air and then the WF-line lay stretched out on the water. A loud splash near the shore close by set my heart turning summersaults.

Oh - only a beaver, startled by the guide who had started collecting twigs and brushwood for our campfire. There he would be keeping the coffee pot heated for me until far into the light summer night. Smack! A resounding smack interrupted my contemplation of the beaver and the fly line went taut. My fly had disappeared.

A growing wake revealed that a good fish had been there. But the line was slack and the fish had vanished. Typical me, always lacking in concentration at the start of a fishing trip when all the new impressions attract one's attention at the same time. All the new sounds and movements of the wild weer as enticing as the fishing. But I knew that the fishing would win.

Dusk had started to fall and the fire the fishing guide had built, spread a pleasant glow around our camping place a bit up towards the edge of the forrest. I had again thrown out the fly, when a large brown trout suddenly leapt clear of the water. The line tautened in pulsating jerks and ran off the reel. The fishing guide, who had heard the sound of the reel, came happily to my aid. The brown trout tried frantically to free itself from the hook, but was in the end forced to give up. It was a beautiful 6 pounder.

The fishing guide put more twigs and brushwood on the fire and it burst to flames again. Out came the coffee pot and soon a delicious aroma of coffee blended with the scent of forest and heather. A beaver head moved silently, across the surface of the water downstream where the veils of mist, faintly red-tinged by a sun already below the horizon, had started their nightly dance out on the water.